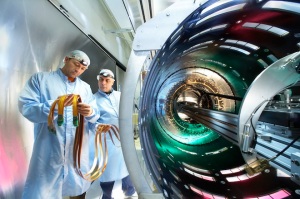 The discovery of the Higgs boson is finally here.

Early in the morning on July 4, America’s Independence Day, physicists with the Large Hadron Collider at CERN announced they have found a new particle that some have called the ‘God Particle’ at the heart of the universe.

CERN director-general Rolf-Dieter Heuer said, “It’s a historic milestone today. I think we can all be proud, all be happy.”  Peter Clarke, Professor of Physics at the University of Edinburgh, says “This is like discovering the heart; without it the entire model of the human body does not work. That is the significance of this particle.”

Fabiola Gianotti of the Atlas experiment at CERN echoed the conclusions of her colleagues: “We all have to be proud of these results. They open a door to a very bright future,” she concluded at the end of her presentation.

Professor John Womersley, chief executive of  Science and Technology Facilities Research Council, which channels UK funds to Cern, said he was delighted with the discovery of a new particle consistent with the Higgs boson. “These results mark a significant breakthrough in our understanding of the fundamental laws that govern the Universe,” Professor Womersley said.

For a generation, scientists have been struggling to explain an essential mystery at the heart of the universe. What fills it? Why is there mass? One example that makes the quest more clear is this. Imagine you are blindfolded and told to push a balloon through a tub. When you do so, the balloon feels heavy. What you cannot know is that the tub is full of treacle – which to ordinary science does not exist, but your experience leads you to experiment to discover what is “treacle”.

“This boson is a very profound thing that we have found. This is not like other ordinary particles,” said Joe Incandela of Cerns’s CMS experiment. “We are reaching into the fabric of the universe like we’ve never done before. It’s a key to the structure of the universe.”

No doubt you (just like me) greeted this announcement with a yawn. While the world is in turmoil, and there’s the shopping to do, it’s hard to think of the discovery of the Higgs Bosun as the earth-moving historic occasion that it is. This is roughly akin to Einstein announcing the Theory of Relativity; that discovery changed our perception of ourselves and the universe for ever.

And I find it particularly apt that for a very large portion of the world, Independence is what is normally celebrated today. This discovery is man’s attempt to find yet another reason not to believe in the Creator.

As a Christian, I’m not opposed to scientific enquiry and discovery. I’m not worried that the Hadron Collider exists and I’m not afraid of what it might discover. As a Christian I already know what upholds the Universe, indeed, what (or WHO) created it – God. It’s really as simple as that, and anything we can discover about our world and environment will not contradict the truths of God. Even the bible that so many sneer about as “unscientific” and “out of date” has plenty of clues about the essential nature and operation of the universe. From the beginning God revealed himself to man as the I AM. Eventually, everything comes back to the existence of God.

However, many scientists embark on a voyage of discovery with the aim of shaking free from God. They believe mankind has invented myths and fairy stories to explain the world, and it is their self-appointed task is to expose them as the ridiculous baseless nonsense that they are. How futile.

Solomon with all his wisdom, learning and understanding ended his days admitting that he knew nothing, and he died a miserable unfulfilled man. Job who understood many mysteries, in his discussion about God’s ways had to admit that he knew nothing! He was dumbfounded to discover that – after all was said and done – he was a mere mortal and could never attain to perfect knowledge.

As God said to him, “Where were you when I laid the foundations of the earth? Tell Me, if you have understanding. Who determined its measurements? Surely you know!” (Job 38:4-5)

Discovering the Higgs Boson is one of the greatest milestones in science given that the sub-atomic particle can explain why some particles have mass, but others, such as photons of light, do not. Theoretical physicists believe that Higgs particles permeate the Universe creating an invisible force field that causes other particles of matter to have mass.

One physicist famously called it the “God particle” because of its central role in theoretical physics – although Professor Higgs and his younger colleagues at Cern despise the term and its religious undertones.

Religion, it seems, is made redundant if we can “explain” the inner working of the Universe. Why? The fact that the universe, and life, exists, and that it works in perfect order, is proof of God not the opposite. We should not rejoice that we have been able to see one infinitesimally small part of God’s creation! How arrogant is man! It is like an ant stumbling into a streetlamp and believing it has uncovered the mystery of light!

Furthermore, this entirely avoids the more significant question of the SPIRITUAL world.

The Power of the Air

Long before “civilisation” and  “technology” the apostle Paul spoke of an eternal truth. He identified an invisible realm, sub-atomic structures if you will, but he called them the “powers of the air”.  “And you He made alive, who were dead in trespasses and sins, in which you once walked according to the course of this world, according to the prince of the power of the air , the spirit who now works in the sons of disobedience.” (Eph 2:1-2)

It has been discernible to all spiritually-minded people that there IS another reality that exists beyond our own. We call it a Kingdom. The Kingdom of God really exists – in scientific terms – but we cannot see it; likewise the kingdom ruled by satanic forces exists and can be discerned, and the bible refers to it many times. All of this is beyond man’s “knowledge” yet THESE are the true realities that affect our everyday lives and our eternal destiny.

On an eternal scale, in God’s realm, it is MUCH for important to grasp the reality of the spiritual world and its meaning than to fill the universe with short-lasting sub-atomic particles. Perhaps these do give mass to what exists. But more important is what holds that mass together? We are told that it is:

“…His Son, whom He has appointed heir of all things, through whom also He made the worlds; who being the brightness of His glory and the express image of His person, and upholding all things by the word of His power…” Heb 1:2-3

Notice that “worlds” is PLURAL. Not only the visible but the invisible world was created by God, and what gives it mass is God. He can be “discovered”. But not through scientific analysis, but by faith! If we would only open our spiritual eyes (as some of the bible believers did in fact) we would perceive the spiritual reality all around us and grasp its meaning!

Those who see the genuine “God Principle” that governs this universe come into a much greater joy than scientists today. They discover not only what holds the physical world together and provides it with meaning, but more importantly, the key to an immense, unlimited, undiscovered and everlasting realm that makes sense of everything!