I have been reading the book of Acts. When I came to chapter 14 suddenly for the first time something occurred to me. On checking my thoughts on the Net, it seems I wasn’t the only one!

In Lystra, where Paul and the others has gone to escape the persecution in Antioch, Paul was stoned by some of the Jewish elders of Antioch who had travelled there on purpose to harass him.

My thought was this: when Paul was stoned by the Jews and left for dead, did he actually die? And was THIS the time he later referred to as his visit to heaven:

That man was clearly Paul himself as verses 6 and 7 show.

The date of the stoning in Lystra was about 45-46 AD and the letter to the Corinthians was written – yes – 14 years later. The timing matches.

The stoning is reported here:

Acts 14: 19 Then Jews from Antioch and Iconium came there; and having persuaded the multitudes, they stoned Paul and dragged him out of the city, supposing him to be dead.

The more I think about it, the more feasible it seems. For one thing, the Jews knew how to stone somebody, as it was a part of their religious system – Stephen had been killed by such a stoning. (Acts 7)

This was not a random mob attack but a supposed penalty for blasphemy. Therefore it was designed to kill, not wound. The Jews who wanted to kill Paul (Acts 14:4-6) would hardly have tossed a few rocks and then walked away.

They not only stoned Paul to the point of death but then dragged his lifeless body out of town as well. How many injuries do you think he must have sustained during all that?

Afterwards, it seems the disciples also believed Paul to be dead. In their love and concern, they gathered around his lifeless body, perhaps praying, perhaps mourning – the way people do today who have witnessed a tragic accident or murder.

No Intensive Care Then

If it had been in this day and age, the disciples doubtless would have summoned an ambulance as fast as possible and Paul would have been in intensive care after a number of operations to re-set his broken bones, stitch his open wounds, and relieve the pressure of blood from his brain. But not having those facilities, at least they could provide a decent Christian burial with honours.

Paul was as good as dead (the bible reports) and even if just badly injured, how likely is it that Paul would survive for more than an hour or two?

But now read what happens next.

Verse 20 However, when the disciples gathered around him, he rose up and went into the city. And the next day he departed with Barnabas to Derbe. 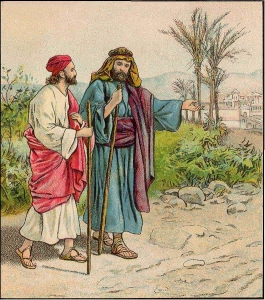 Paul got up, and walked back into the city! (Imagine the news reaching those hateful Jews – “Paul’s not dead, he’s returned, and he’s fine”).

Does that sound like a man who has been stoned within inches of his life?

Paul walked back into Lystra, and the next day he’s back on his missionary journey again, along with Barnabas, ready to preach the gospel and encourage the churches. This at the very least is a miracle.

But is it even more – a resurrection, as with Lazarus?

I found it interesting that Paul’s message now contains information about the coming tribulation. The disciples at this early stage mostly believed that Jesus would return to them, overthrow the opposition, and set up the Kingdom within their lifetime. Paul now seems to have been shown different information as he tells the churches that they must strive to “continue in the faith, and saying, “We must through many tribulations enter the kingdom of God.” (verse 22)

However, Paul did not speak of what he experienced during that crucial time (unless he spoke privately to fellow apostles). It is 14 years after the event that we learn of it in the letter to the Corinthians. Even then, he is wary of saying too much.

But did he receive in Heaven from God himself the information he later wrote of in Thessalonians and other letters, about the coming Tribulation, the state of the world just before the Coming of Jesus, and the signs leading to the appearance of Antichrist? I feel it might be so.

God may have allowed this experience to strengthen Paul against the suffering he would experience on his missionary journeys. Having been given a glimpse of the heaven that awaited him, he could face the most relentless and severe suffering that dogged every day of his life.

In some ways, Paul experienced a Rapture.

Since the disciples were watching his body on the road, it seems like only Paul’s spirit was “caught up” – he uses the word HARPAZO which is also used for the Rapture in 1 Thessalonians 4:17.

The “third” heaven in Jewish and Greek thinking was the dwelling place of God, since the first was the atmosphere, and the second was outer space (or perhaps the lower spiritual realm of the fallen rulers of this planet).

Thus Paul tells us that he visited God, and heard inexpressible things – things that he either could not or would not share on earth. Words which, Paul said “it is not lawful for a man to utter”.

He says the words he heard were “unspeakable” and it was not “lawful” to share them. This implies some kind of prohibition.

“And heard unspeakable words” … The word which is rendered here as “unspeakable” may either mean what cannot be spoken, or what ought not to be spoken. The word means unutterable, ineffable; and whichever idea we attach to it, Paul meant to say that he could not attempt by words to do justice to what he saw and heard.

“Which it is not lawful for a man to utter” [Margin, “Possible.”] The word is most commonly used in the signification of lawful. Thus, Matthew 14:4, “It is not lawful for thee to have her.” Acts 16:21, “which it is not lawful for us to observe;” … it probably means moral possibility; that is, propriety, or it means that it is right. It seems to me, therefore, that the word here rather means … that there was some reason why it would not be proper for him to have attempted to communicate those ideas. [Source]

If Paul was prohibited from sharing the information, one reason may have been the content, if it contained (as I suggested earlier) prophecies of the End.

To have tried to explain to the Apostles that despite their dedication to the preaching of the gospel, they would not see Jesus return, would experience nothing but increasing persecution, and would all ultimately be martyred would surely have discouraged them too much.

Likewise to tell the Church that it would be thousands of years before victory came, and that the world must descend into utter depravity and godlessness first, would have been disheartening to say the least.

Whatever Paul heard, he wrote and said nothing that we know of. The mystery remains. However, I believe we can fix the occasion of Paul’s visit to Heaven to Lystra when he was literally stoned to death.

23 thoughts on “Did Paul Die and Come Back?”