Awakening is a term coined by Qanon and others who proclaim vengeance on the secretive powers controlling the world who have supposedly turned humanity into passive sheep.

They are calling their followers to “take the red pill” (a reference to the movie Matrix) awaken from slumber and rise up against their foes.

Here J.D. Farag – Pastor of Calvary Chapel, Kaneohe – provides a helpful and comprehensive outline of the dangers for Christians in following the QAnon “drops” or “prophecies” or warnings.

Pastor JD explains in this video why the QAnon Great Awakening may very well become the great deception. He gives three main reasons for speaking out:

He is mindful of the warning given to Ezekiel. In Ezekiel Chapter 33, the watchmen is told to pass on God’s warning to others, or else have their blood on his own hands.

Along with other ministries recently, Farag reveals that the endgame of these influential new conspiracy sites is not so much to point to the problems (many of which are real) but to encourage the ANSWER, a global reset of ideals and beliefs, a wonderful new age of enlightenment.

It is not just that the Qanon pronouncements are mostly wrong (see list of failures below) but more importantly they are opening the door to an even greater delusion, the one predicted by Jesus, Paul and John – in the Word of God, the only reliable source of future information!

Restoration without the Lord

All of this renewal and restoration is proposed by Q without the return of Jesus Christ, and omitting all talk of the Great Tribulation or worship of the Antichrist.

Biblically literate Christians know that no world restoration is possible or is prophesied before the physical return of Jesus Christ. So it is amazing to see so many rejoicing in the idea of a great awakening, and overthrow of evil, before that time.

Gal 5:7-8 You were running so well. Who has obstructed you from obeying the truth? Such persuasion does not come from the One who calls you.

Look at just a small selection of Q “drops” (statements provided by Q anonymously to his followers.) Do these seem like statements a Christian could support? 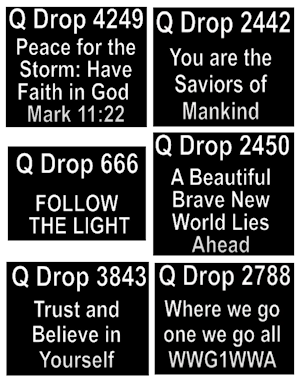 Just one aspect of the Awakening is an economic “reset” shown in the image below. The National Economic Security and Recovery Act (NESARA) was a set of proposed economic reforms for the United States suggested during the 1990s by Harvey Francis Barnard. Barnard claimed that the proposals, which included replacing the income tax with a national sales tax, abolishing compound interest on secured loans, and returning to a bimetallic currency, would result in 0% inflation and a more stable economy. 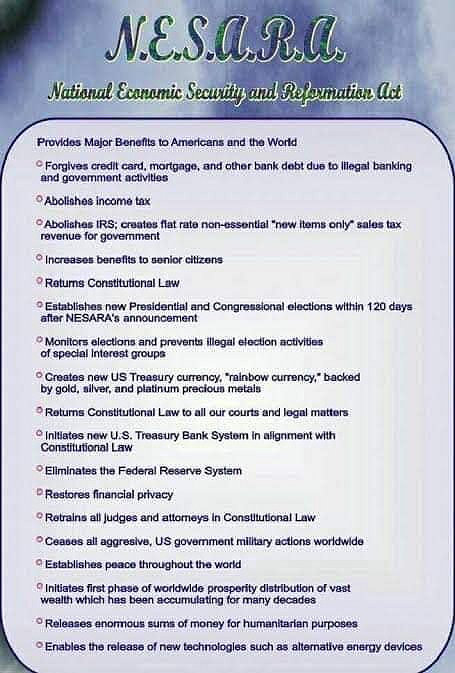 NESARA has since become better known as the subject of a cult-like conspiracy theory promoted by Shaini Candace Goodwin, as “Dove of Oneness“.  Goodwin’s conspiracy emails have been translated into several languages and have a large following online.

These suggestions are wild and fanciful in the extreme. Any genuine Christian should know, for instance, that a redistribution of wealth, abolition of income tax, the forgiveness of all debt, and a worldwide new currency system are not only impossible ideals, but would more than likely entail the acceptance of the Mark of the Beast (Revelation 13).

Ironically, this is the very same Mark of the Beast that Qanon claims is already in a variety of things such as masks, vaccines and 5G wireless masts.

The conspiracy falsehoods are emotional blackmail.

They generate an inexplicable FEAR. That fear not only leads Christians to look in the opposite direction for the Mark, distrust everyday objects, and ignore the Book of Revelation, but it transforms the real Mark, when it comes, into something benign and acceptable by contrast.

The prophecies of Qanon more often than not prove to be entirely false.

Over the years Q has repeatedly given specific dates when leading politicians and celebrities would be arrested or even killed. The group and its followers have claimed that Hillary Clinton has been hanged, that there is going to be a faked assassination of Donald Trump, his opponents in the media would be arrested, and many would commit suicide over a specific weekend. None of this ever happened, or could happen, but the cult believers of Q just go right on trusting his every word.

Nonetheless, many – including Christians – trust that soon the evil of this New World Order and its elitist cabal will be overthrown, and humanity will be saved and restored.

They have even been encouraged via the QAnon “drops” to swear an oath of allegiance not just to the Constitution but alongside that, upholding the plans and ideals of Q. This photo shows one group going along with the suggestion. 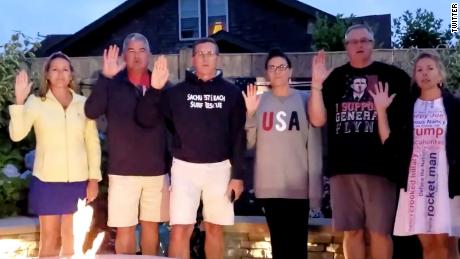 Here, former national security adviser General Michael Flynn celebrates July 4th by leading his friends in reciting the oath to the Constitution AND the slogan for QAnon conspiracy theorists. At the end of the oath he added the QAnon slogan: ‘Where we go one, we go all’.  [See Video] 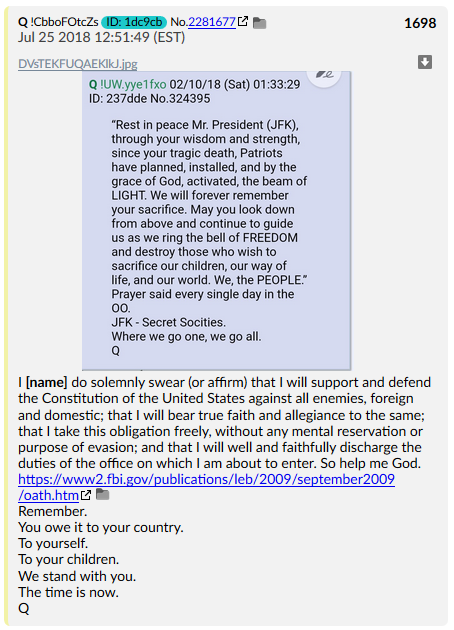 If you are entangled in the web of conspiracy, you need to stand back, reassess your position, and repent before the Lord for being led away from biblical truth.

Ask God to show you the truth. You have nothing to fear from truth!

Only GOD and his WORD will be left standing in the last days. Great deception, such as could deceive the very elect, is coming, and soon. It has already begun!

If you commit your way completely to God and ask for your eyes and heart to be opened to the entire truth, the scales will fall from your eyes and you will see what that cunning snake, Lucifer, has been doing and what he plans for your future.

Here you can see and download many disturbing ‘maps’ of the Q Anon/new-age agenda – scroll down THIS PAGE.